What is “Algorithm-Based Debt Payoff Software”?  Most people have heard the term “algorithm” before.  They typically get the picture that the word has something to do with techy computer programming stuff… and they’re right.  But it’s more than just “programming code”.  It’s “decision tree” programming code, which means that the computer tests to see if certain conditions exist or certain requirements have been met, then depending on the answers it finds, it makes some kind of decision.   Sometimes the decision is just a simple “if such-and-such is the case, then do this or that.”  Other times, it can get much more complex, checking conditions that exist based on the status of other conditions… and so on.

For example, if you’re using a GPS to help you navigate, an algorithm checks to see what roads get you from point A to point B, then the GPS displays the path to your destination by choosing the most direct path.  The GPS can get a little more sophisticated with a more complex set of algorithms that lets you choose between the most direct path based on shortest distance (a condition), or the fastest path based on shortest travel time using speed limit data for each segment (another condition).  In order to do that, the GPS needs to measure mileage to determine distance, and it has to compare other paths based on speed limits for each stretch of road to determine shortest time.  Sometimes a longer distance along the highway will be faster than a shorter distance on slower backroads.

A really, super-capable GPS can use even more complex algorithms, making real-time adjustments to your selected route based on your actual travel speed (rather than posted speed limit data), and actual traffic conditions (taking into account road construction, traffic jams, accidents, etc.).  It can automatically update your path in the midst of changing, real-time circumstances as you travel.  If you take a wrong turn or decide to detour off the planned route, the GPS recognizes the change and automatically re-adjusts your directions to get you back on track based on the current conditions at that moment.

Because It Sees Years Ahead to Get You Debt-Free!

In terms of how the debt payoff software works, when your financial picture is entered into the program, the algorithms look at how much debt you have to pay off… sort of like “reaching your destination”.  Then the program looks at the total number of debts to pay off (sort of like all of the available roads and side roads to get to the destination)… and all of the different types of debts that make up those roads and side roads, because some debts are like highways, some are like two-lane blacktop country roads, and others are like dirt or gravel roads that may appear to be more direct on a map, but in reality they’re a lot slower to travel.  Then the algorithm-based software chooses the path that gets to zero debt the fastest by considering your financial “road conditions” and mathematical principal-to-interest ratio “travel speeds” along each stretch of those roads.  Along the way, if you have to detour because of an unplanned purchase, unexpected expense, or a change in income (which we’ll call “wrong turns”, “accidents” or “road construction”) … the software recomputes your fastest-path to zero debt and updates your driving directions.

All you have to do is follow the simple instructions.  It does all the “heavy lifting” math and decision-making based on your actual, ever-changing economic picture and your financial goals.

I understand the concept, but I'm skeptical. How does it work?

Are You Using Outdated Ways to Get Out of Debt?

Ask yourself this: If you had to make a long cross-country trip over mountains and through valleys to someplace you’ve never been before, would you you choose a horse & buggy?  Or would you perhaps want to get there a bit faster in a Tesla or Ferrari?

Not only would the horse & buggy take longer, there would also be a lot more incidental expenses along the way: lodging, meals, repairs, etc. all due to the extended time and outdated mode of transportation.  And… you’d be looking at a horse’s ass for the entire journey. 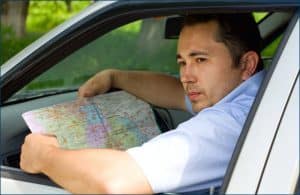 It’s time to modernize your approach in your journey to your “debt-free” destination!

It's Time for a Story*

Mary and Bob are a happy couple.  They’ve seen good times.  They’ve seen hard times.  They carry some debt and want to get it paid off.  They’re a little later in life and don’t have much of a retirement saved up.  And they still have some bucket-list items that they don’t want to abandon… because as we all know, life is short! 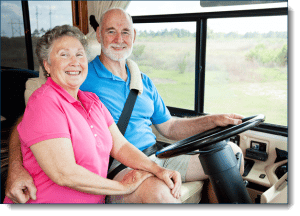 Bob and Mary represent represent the average consumer in today’s economy.  You may be older or younger, and the nature of your expenses might be different.  But “debt is debt”, and the numbers don’t care who you are or where you are in life… If you are in debt, you’ll likely find yourself having a few things in common with Bob and Mary.

They’ve lived through some tough financial times like the recession of 2007-2009, the COVID-19 pandemic economic shutdown, and so on.

Due to “life happening” and a few financial choices along the way that they wish they’d managed differently, they carry the statistically average household debt of $137,063.

They’re uncomfortable talking about “money” topics.  They don’t like being in debt, but they struggle with the dilemma of “living life” versus facing financial challenges in the future.  So, for years they’ve largely ignored the harsh reality that they’ve been paying their lenders money in interest payments that they would have been saving towards retirement− if they could only have found a way.

As people learn in life, they’ve come to realize that time seems pass by faster the older you get.  What they used to talk about as “the future” is now today.  So they feel torn between competing priorities: meeting their financial commitments, and accomplishing their bucket-list items.  It’s not an unreasonable desire to do both.  But how?

So their tendency along their journey was to avoid the topic or make light of it to conceal their underlying stress with money, debt, cash flow, and the cost-of living.  They’re the people with the bumper sticker on the left side of the car that says, “My kids and my money go to XYZ University”, and on the right side of the car, one that says, “I’m spending my kid’s inheritance”.  Ha, ha.  It would be funny if it weren’t so true.  And they feel it. 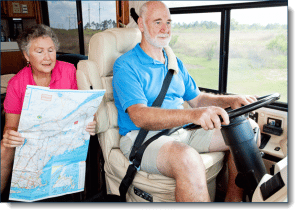 Several years ago when their income was great, Bob & Mary bought a motor home to travel the country and visit their kids.  They carried a stack of maps to find their way around– It’s a big country.

They knew the general direction they wanted to go, but the maps were often outdated, not depicting new roads and highways.  The maps also didn’t reflect obstacles like road construction, accidents, traffic jams, and so forth.  So the path to their destination was pretty direct on paper, but in reality, there were always some unpleasant surprises and uncertainties on long journeys.  And when they occasionally disagreed on the best path to take using the paper maps, the trips weren’t always pleasant, in a marital sort of way.  Stress has a tendency to create problems in relationships.

One day it occurred to them that they dealt with money decisions the same way.

All-in-all, they tried to follow the trendy debt-payoff regimen taught in a popular financial program, taking little steps at a time to make a difference… but they felt that the plan they were following had a negative impact on their lives, goals, and lifestyle.

They realized that, although their efforts were making a dent in their debt, the concepts were archaic.  They were leaving money on the table with their lenders and not really enjoying the lifestyle changes imposed by the program.  It was a “one-size-fits none” experience, because it didn’t take their unique, individual circumstances and goals into consideration.  It was like following the paper maps.  And it caused significant stress between them.

With a New Plan 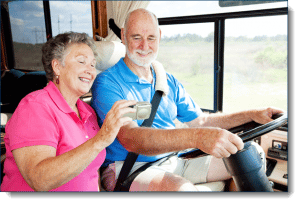 Mary and Bob felt sure that with today’s computer technology and portability, there were better options available for both their road trip navigation and their financial navigation.

They were right in both cases!

For their road trips, they purchased the latest GPS.  Trips became faster, easier, and much more fun!

And for their financial journey to become debt-free, they decided upon a financial GPS approach.  To say the least, it was an eye-opening experience for both of them.

Even though Bob and Mary were getting a late start in their journey to debt-freedom and a secure retirement, they now had a plan they knew would work if they followed it, guaranteed in writing, and they didn’t have to eat beans and rice every night to make it happen. 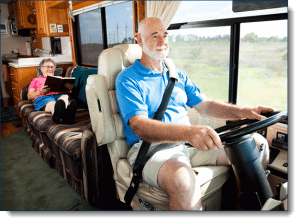 Bob and Mary can now travel the country without worrying about money.  Because of the algorithm-based software, they can see their financial future, just like planning a trip with a GPS.

When their situation changes, as it does in life for everyone, they simply update their financial picture as a snapshot-in-time, and the program instantly updates their path, their directions, their payoff date, and their numbers.  It’s virtually effort-free on their part.

In fact, they were able to shred eight (8) years off of their debt payment schedule according to what their lenders told them.  Their debt payoff time was reduced from 14 years to just six.  In the process, they’d save over $30,000 in interest payments, and by the time they reached the point when the banks would have had them at zero debt, they should have approximately $185,000 in savings.

Get Your Free Debt-Payoff Analysis

* ``Bob`` and ``Mary`` (not their real names in our fictional story) are actors. Although the specific scenario of Bob & Mary depicted above is not specific to an actual client, the general scenario is similar to many clients who use the algorithm-based program.

This website uses cookies to improve your experience while you navigate through the website. Out of these cookies, the cookies that are categorized as necessary are stored on your browser as they are essential for the working of basic functionalities of the website. We also use third-party cookies that help us analyze and understand how you use this website. These cookies will be stored in your browser only with your consent. You also have the option to opt-out of these cookies. But opting out of some of these cookies may have an effect on your browsing experience.
Necessary Always Enabled
Necessary cookies are absolutely essential for the website to function properly. This category only includes cookies that ensures basic functionalities and security features of the website. These cookies do not store any personal information.
Non-necessary
Any cookies that may not be particularly necessary for the website to function and is used specifically to collect user personal data via analytics, ads, other embedded contents are termed as non-necessary cookies. It is mandatory to procure user consent prior to running these cookies on your website.
SAVE & ACCEPT
Thanks for subscribing! Please check your email for further instructions.You'll need to confirm your subscription by clicking the verification link in your email.